July is already around the corner. Take a look at our 5 digital activation ideas for July guaranteed to provide a cool experience to your fans and new data to your database.

Finally it’s (almost) July. A time of beaches, fireworks and summer sports. Let’s keep the summer vibes going with some Activation inspiration that will allow your fans to have a great time and will create the opportunity for your team to collect valuable first-party data. With each month comes great opportunity to learn more about your fans unique characteristics and preferences by creating fun and engaging digital activations. Let’s take a look:

There’s no better way to start the month than to crack a few good ones and create an activation that will leave your fans with a smile. With our personality test activation, your fans can answer various questions and see which players share their sense of humor, this is a great way to create stronger connections between fans and players that will also enable you to safely collect and own first party data. Another idea is to display funny moments from the season and have your fans vote on which one was their favorite.

Overtake your competition this season by offering our running man activation on your social media platforms, but with an F1 twist. With Pico’s Running Man activation, we can race as one of the teams overtaking the competition, collecting Grand Prix trophies, and collecting sponsored products. This is a great way for your fans to engage in race weekend excitement by racing their own virtual sports car and winning the Austria Grand Prix. You can even keep track of scores and fans can compete against each other to see who was able to land the most trophies. 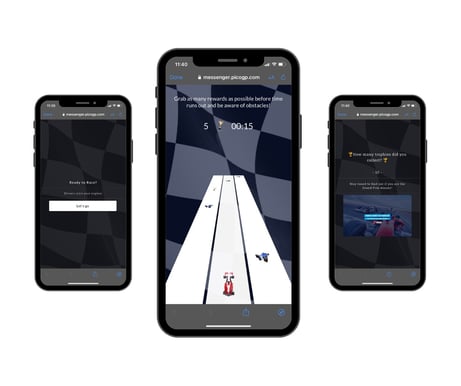 Our Tricky Cups activation turns a classic game into a great opportunity for fan engagement. For example, if you have a beverage sponsor, you can ask fans to locate the beverage under the red cups that are always a classic at any summer or Fourth of July party.

American Independence Day presents many opportunities to celebrate with your fans while creating brand awareness to your sponsors, a unique experience for your fans, and safe-data collection for your organization.

3, 2, 1 BUZZ! Did your team score the game winning three by using one of our activations this NBA finals season? We know you can handle the pressure, but can your fans? Test how your fans handle the pressure with our personality test activation. Where they’ll have to answer questions about the types of moves they would make under high pressure situations and be resulted with what type of player shares their under pressure personality.

This is a great opportunity for you to strengthen the relationship between your fans and the players, not to mention you’ll find out which fans connect with which players. We also suggest using our predict the lineup activation, where you can channel game day excitement by having your fans predict the ultimate game day line up.

What better way to participate in the NHL finals than to have a chance to win prizes from your favorite hockey teams. As your fans “spin the stick” with our spin the wheel activation, they can land on hockey pucks, sponsored products, or the Stanley Cup itself. This is a great way to channel the excitement of the NHL finals and your fans will love getting involved in winning their own digital Stanley Cup. Not to mention your team will be the real winner this finals season by uncovering thousands of anonymous or “hidden” fans.

Written by Pico Get Personal