Taking a look at Omri Casspi's iconic basketball career and how Maccabi Tel Aviv Basketball partnered with Pico to honor this legend and his decorated career as he announced his retirement.

The basketball, NBA, and Euroleague world came together in honoring Omri Casspi’s legacy with what we are coining “National Omri Casspi Day.” On July 18th, 2021, Casspi hung up his sneakers and ignited years of memories for his fans and fellow teammates. Throughout his career, Casspi created 16 years of plays, memories, and iconic moments for his fans all over the globe. His journey abroad began in 2009 when he was drafted by the Sacramento Kings after playing for home-team, Maccabi Tel Aviv Basketball. While anyone being drafted is something to celebrate, Casspi’s draft held heightened meaning as he was the first Israeli to be selected in the first round of an NBA draft. From the Kings to the Memphis Grizzlies, and five teams in between, Omri Casspi’s career was one for the books.

After an immense NBA run and an unfortunate knee injury, most would deflate the basketball and call it quits. Yet, as we’ve learned, Casspi is not like most. Maccabi Tel Aviv hit the jackpot when Casspi signed a three-year contract with the team in 2019. Returning to Maccabi Tel Aviv was a complete “full-circle moment” for Casspi and the most holistic way to end his career.

On the announcement of his retirement, Maccabi Tel Aviv knew they wanted to celebrate and honor his achievements in a special and unique way. To celebrate all of Casspi’s accomplishments and play into their fans' nostalgia, Maccabi Tel Aviv partnered with Pico to launch a digital activation. This activation consisted of trivia questions surrounding Omri Casspi and his famed career. Fans played for the chance to win an authentic “With Us” club-inspired Omri Casspi jersey. 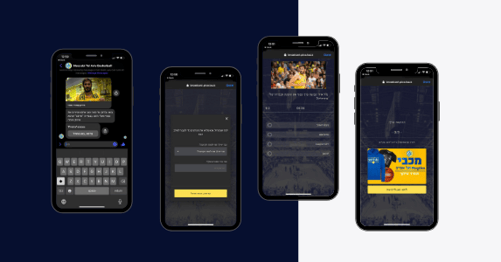 While being a fun way to engage fans and celebrate a decorated athlete, the trivia also served as an incredibly efficient way for Maccabi Tel Aviv to collect first-party data on its fans, as well as bring awareness to the team’s “With Us” club. Email address, date of birth, location, and interest in season tickets were among the data points that Maccabi Tel Aviv captured on its fans. Creating an opportunity for more efficient, and targeted marketing.

Timely and relevant are not just buzzwords, but rather guiding principles for all published media. In collaboration with Pico, Maccabi Tel Aviv was able to adequately honor Omri Casspi’s career while also learning more about their fans by capturing valuable data

Honoring Omri Casspi and all he has contributed to the game of basketball is not an easy feat, yet in collaboration with Pico, Maccabi Tel Aviv was able to provide fans with an experience to do so. Casspi’s legacy will live on long after this activation and we look forward to where his career will go post-basketball.

Hailing from Philadelphia, Gracie is part of the 2021 Summer Marketing team at Pico. Currently a double major in Entrepreneurship with a focus of Corporate Innovation and Professional Sales at Indiana University. With a passion for creativity, business, and tying the two together, Gracie is taking the industry on by storm.