Fan engagement doesn't and shouldn't stop when a fan officially becomes a club member. Here's how Maccabi Tel Aviv Football Club engages their VIP members through unique digital experiences while learning more about them along the way.

Any type and level of fan is important. Whether they’ve attended games in person, or make sure to catch the game every week on TV, purchased merch, or simply engage with their favorite team on digital - they’re all important and offer uniqueness in their own way.

When a fan officially becomes a member of a club, it’s important to do whatever possible to maintain a connection and familiarity. Just because they converted doesn’t mean they don’t want unique, personal experiences, because when they decide to eventually renew their memberships, they aren’t only weighing prices and facilities- they’re also measuring how they feel in the community that the team/organization has created.

Keeping members involved and informed on digital in the same way non-members are targeted can help drive member engagement and increase retention.

Maccabi Tel Aviv FC understands that fan engagement doesn’t end after someone signs up to become a member. Which is why they launched an exclusive activation for their Forever Club VIP members. Launched via SMS messages, club members were asked to play the Running Man activation for a chance to win an entire travel package to an upcoming away-game in Finland. The package included flight tickets, hotel accommodations, and of course tickets to the game - a truly one of a kind experience.

The opportunity evoked quite a large interest from Forever Club members, with a 25% CTR on the activation link within the text message. Fans were greeted with a fun and lively Running Man game where in order to get points they needed to capture all of the planes on the track while avoiding the opposite team logos. 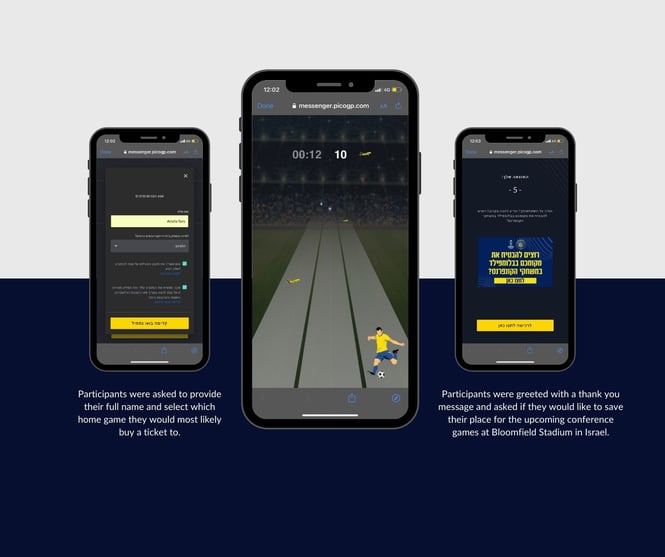 84% of participating fans finished the experience with an option to buy tickets to the Conference Games at Bloomfield Stadium in Israel and 87% of total participants went on to share additional details about themselves. Onboarding new fans and memberships is a metric that will always be important for any type of organization. Those same strategies can be implemented in engaging and connecting with current and VIP fans. It shows to fans that there’s a for-life community and it presents the team with creative opportunities to learn more about each and every fan.

Ready to strengthen club memberships and fan relationships through digital?

Marketing Manager at Pico. Hailing from the East Coast, with a passion for all things tech, marketing, and sports